From Showrunner and Executive Producer Misha Green, HBO’s new drama series, Lovecraft Country, is based on the best-selling novel by Matt Ruff and follows Atticus Freeman as he journeys with his childhood friend, Letitia, on a road trip from Chicago across 1950s Jim Crow America in search of his missing father. The search-and-rescue turns into a struggle to survive and overcome both the racist terrors of white America and monstrous creatures that could be ripped from an H.P. Lovecraft paper book.

The Koalition spoke to Jurnee Smollett who stars as Letitia, “Leti” Lewis about her impactful role as we dive deeper into the importance of Lovecraft Country and what we can expect from the HBO show.

As a child actress, much of Smollett’s movies have addressed the history of American racism and the mistreatment of Black people — from Underground to Charles Burnett’s Selma, Lord, Selma. Lovecraft Country is no different as it brings to light the threat of racism which makes it both timely and timeless. As an activist, Smollett looked back at the America that was, and still is, in preparing for this role.

“In preparation for this, it definitely required a lot of research and was quite sobering to see the parallels. The fact that the systemic racism that this nation’s been built upon and yet to be dismantled and, very much so I could relate to so many instances in the text. You look at something that happens during this period like an Emmett Till and you see a Trayvon Martin. And really the story is so ancestral. Our heroes essentially are going on a quest to bring down white supremacy, and we are still on that quest today in 2020 as Black Americans; because racism is such a demonic spirit, it’s something that we are still fighting off. But I think, one thing I love so much about the research process was going back to writings like James Baldwin or Gwendolyn Brooks or these great minds and thinkers like Lorraine Hansberry, and there’s such wisdom and knowledge that they provided then that we can gain from now. And it’s, it’s humbling. It’s humbling.”

The theme of true monsters in Lovecraft Country are the racist humans rather than the monster is the heartbeat of the show and this tension follows Tic, his Uncle George (Courtney B. Vance), childhood friend Letitia (Jurnee Smollett) and other family members as they encounter monstrous racists — and literal monsters — in the early civil rights era.

Set primarily in the North — an integrated section which flaunts discriminatory housing policies, sundown laws, and violent intimidation laughed in the face of segregation — it uses horror to confront the embedded racism that lurks in every corner of American society. 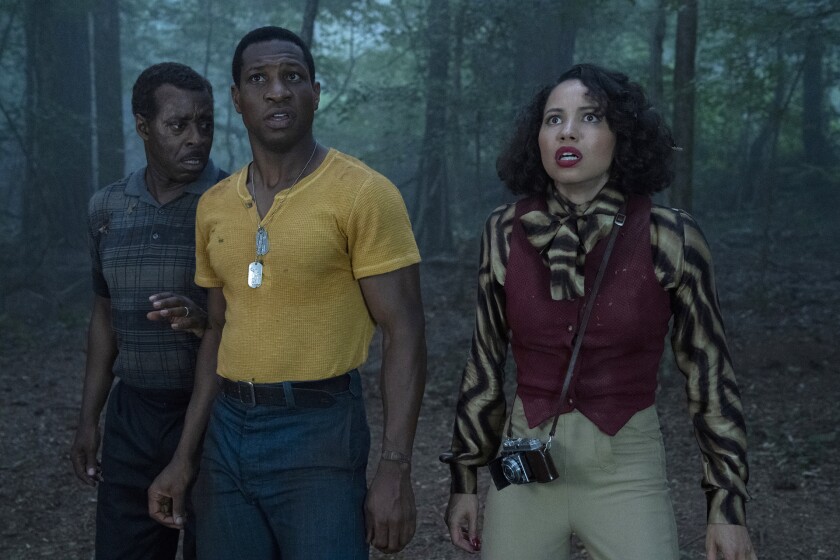 “What we explore in the show is how with a monster you know what you get, right? If you see a Shoggoth ( monster in the Cthulhu Mythos mentioned in passing in H.P. Lovecraft) you kind of know what you’re up against. The unfortunate thing about the spiritual warfare almost that our characters are engaged within bringing down the racism is that you don’t really know where it’s coming from. And that is sometimes even more of a threat because it’s unexpected and it affects your livelihood, and it affects you on every single level. It affects your pursuit of happiness; your pursuit of joy; your pursuit of a family trying to live in a neighborhood that is all white; the isolation; the loneliness; but, also, the trauma that you experience on so many levels in being black and American; the displacement when you realize that America’s not evolved into a place for you. So the attacks come on every level from racists, right? With a monster, you kind of–you just got to outrun it.”

Man-eating monsters, secret societies, ancient banshees, and a plethora of other creatures are factored into the narrative of the series, with each episode framed around a new monstrous creature that connects back to Atticus and his search to understand and free himself from the horrors of his past. This is what makes Lovecraft effective, the overwhelming sense of terror and isolation he creates — even if these emotions were enhanced by his fear of others.

The show covers a variety of genres and landscapes in hopes of connecting our past to our future, the generational pain we all suffer.

“Misha has this gift for maintaining varying degrees of tone so we really got to explore a lot. It’s hard for me to say what–to pick because it’s–there were so many different colors and different ways we got to play. So, I can’t really pick one. It’s wild because it’s like Lovecraft really deconstructs the classic genres in so many ways and then re-imagines in such radical ways as well. I know we found ourselves like each time we would get a script, texting each other we would be like, ‘What! Did you read Episode 9?'”

Despite the darkness, there is light, and Lovecraft Country also focuses on the positive and the progress that is made in America. Smollett as Leti is a breath of fresh air. She looks at racism in the face and laughs at it, she defies social norms placed on Blacks and she lives her life for herself. Leti walks a tightrope, swings a baseball bat, and moves into a white neighborhood.

“Leti would iron her dress and do her hair and makeup every single day, and regardless of how they mistreated her, neglected her, or underpaid her, she would not allow them to rob her of her dignity. The pursuit of dignity, the pursuit of joy was so radical to me, but these are the women we come from. It reminds me of something I talk about sometimes, what my teacher talks about is this idea of blood memory this visceral ancestral connection to the impression of our people. And so, you for sure could feel in moments that on a molecular level the vibrations in certain scenes. But we held on to each other and there was such trust and a bond with each other. I don’t know if I would have survived without the fist-bumps.”