The times are definitely changing. Nowadays, it’s often difficult to tell the difference between an indie title, and a title from a AAA studio. Part of this is due to the fact many AAA developers are stepping down from their reigns to to develop fun indie games with resources they didn’t have before. Some of these devs start their own studios, and others join already established indie teams. Chainsawesome Games, the studio behind Knight Squad is back with an all-new title for 2018: Aftercharge.

Aftercharge is the studio’s third title. The game wasn’t always the way we see it as today (it was originally called Electric Panic). In 2015, the studio created a prototype in the Pixel Challenge 48-Hour Game Jam – a competition where you have to build a working prototype in two days. The game was originally a top-down perspective game similar to Knight Squad, but wanting to step things up a bit, they switched to a first-person shooter style while still holding the prototype’s core gameplay.

“Aftercharge is a 3v3 competitive indie shooter where one team is invincible and the other is invisible.” Chainsawesome Games affiliate Kyle Gaddo explained. As the robotic “Workonics,” you use your invisibility to rise up and sabotage the human encampments by destroying energy extractors – attacking one of these makes you visible, and the human players can kill you very quickly. As human “Guards” your role is to defend the energy extractors, as you need them for powering up your weapon.

Although humans are technically invincible, they can still be defeated. Without energy extractors, they cannot reload their weapons and use their special attacks. These attacks include ion grenades, which reveal enemies within a certain radius, and an air strike, which rains heavy damage down on an area after a small delay. Kyle told me his favorite technique was to wait for one robot to become deactivated, wait a few seconds, and launch an air strike on the deactivated robot – robots can revive each other, so it’s important to keep an eye on any deactivated ones.

To win a match, a team of Guards must have all three Workonics disabled at the same time, or a team of Workonics must destroy all six energy extractors on the map. It is definitely easier said than done! At PAX East in Boston last weekend, I got the chance to play the game. The demo allows you to play two rounds, one as the robots, and one as the humans.

The game definitely requires a lot of teamwork and good communication with the other two players on your team. Although the premise may seem simple on paper, I assure you it is not: it takes plenty strategy. One thing that makes winning as a robot more difficult is the humans can push and shove the deactivated units around, always keeping an eye on them. If you choose to take the risk and revive them while this is happening, you can end up sacrificing yourself!

Upon release, both Guards and Workonics will have different classes. Each class will have its own attacks and abilities, making gameplay interesting and ever-changing. If you’re looking for a fun alternative to Destiny (3v3) or Overwatch (awesome arena gameplay), I highly recommend keeping Aftercharge on your radar.

Aftercharge is set to release Q1 2018 on PC and consoles. 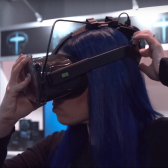