I remember my first experience of an Aliens vs Predator game created by Rebellion way back in the nineties, back then I thought the game was superb, sure it had some problems but at the time I was still in my gaming diapers and anything with blood, violence and aliens was fantastic. Now fast forward to 2010 and the good folks at Rebellion have decided its time to bring back the blood, violence and Aliens in a brand new updated Aliens vs Predator.

As in previous games the campaign mode in Aliens vs Predator is broken up into three different sections, you have one campaign for the Marines, one for the Aliens and one for the Predator. In the Marine campaign you play as well a Marine who finds himself left behind after he is knocked out while under attack from the Predator mothership. Once you come around you then head out to try and find your missing squad members. While looking for your squad you discover that the Weyland-Yutani corporation have been studying the Xenomorphs aka Aliens and do not want anyone to know what they have been up too. If you have watched any of the Alien movies you pretty much have already heard the Marine story. It consists of shoot, go somewhere and shoot some more.

The Predator campaign was for me a little more interesting, you begin as a young hunter who is sent out to try and find the bodies of three fallen brothers, while on that mission you uncover some details that change your plans and you end up having to erase all evidence that you, the Predator species was ever on the planet. This campaign was easily the most enjoyable for me as it had a semi decent story and allowed me to live the life of a ruthless killing machine a few hours. I also enjoyed the element of stealth this campaign had to offer. There was nothing more satisfying that sneaking up behind a random grunt and ripping his head off.

Now that just leaves the Alien campaign, If you are looking for a bit of back story on the Aliens or something to help you understand them, you will not find it here. You begin by bursting out of a human who is part of a science project the Weyland-Yutani corporation have been conducting. You then hear a call from the Matriarch, who is the Queen Alien which prompts you to escape the facility and free her. Once you have completed that task there is really not much in the way of a story. For the rest of the campaign you receive orders from the Queen to either kill a bunch of marines or harvest humans. I found these orders more of a chore than a fun filled chest bursting experience. I don’t know if the folks at Rebellion could have done it any differently but if you are not a fan of the Aliens you should play the other two campaigns first then run through this for the achievements or trophies.

In total the three campaigns in Aliens vs Predator should last you around 10-12 hours but this could be longer if you are the type of gamer who likes to hunt around the levels for all the collectables.

Its the multiplayer which I think will bring the most longevity to the game. Rebellion have included seven different game modes including the standard modes like Capture The Flag, Deathmatch, Team Deathmatch and Mixed Species Deathmatch. There are also a few much more franchise specific game modes including Predator Hunt, which really reminded me of the very first Predator movie, you know the one where Arnie and his squad are in the jungle with a Predator hunting them? Yes well this game mode is just like that minus the mud. Then there is Infestation which is pretty similar to Predator Hunt but with a slight twist. Instead of controlling a Predator, one player controls an Alien and when that player kills another player they join the Alien ranks, think of it as Aliens vs Predator’s tag your it game mode. Rebellion have also joined the co-op party by including a brand new Survivor mode which puts you and three buddies into a small arena and throws wave after wave of Alien at you. I know it sounds just like Horde mode in Gears of War but take it from me its a much more frantic and fast paced experience. At times I found myself shooting all over the place simply because there was so much action going on.

Multiplayer in Aliens vs Predator should hold your attention for at least a few months, maybe even more. It all depends on how much a fan of the franchise you are. There are more than enough modes available to suit whatever type of player you are. My only slight gripe with this aspect of the game would be the matchmaking. Sometimes I had to wait around 5 or 10 minutes just to get a room full of people. I don’t know if it was my Internet playing up or a lack of people online but I hope SEGA find a way to speed the process up soon or it could kill the online multiplayer, at least on consoles.

Aliens vs Predator is a little bit hit and miss in the audio and visual departments. Sure the game does look good in places and all the main characters are detailed and true to their movie counterparts but if you compare the overall look to some of the competition around, areas of the game begin to look a little dated. I also found some of the locations you visit rather drab and a few of the textures seemed to be on the low resolution side of the scale. The lighting on the Marine campaigns levels could have also benefited from a little extra attention. Some of the areas were so dark that I often found myself either missing things or bumping into small containers and stuff. The flashlight on the Marine Assault Rifle really never helped that much, I think I could have got more light from a candle than I did from the torch on that gun. At some stages in the game things got so bad for me that I was forced to increase the brightness from the options menu just so I could see what I was doing. As for the sound, well all the stuff you are familiar with is in there, everything from the trademarked Alien screams right down to the sound of the Predator swapping his visual aids. I really got the feeling the folks at Rebellion put alot of time into trying to make the game sound as authentic to the franchise as possible. I just wish they did the same with the other areas of the game.

If you are a fan of the Aliens vs Predator games on PC, you really cannot go wrong with this but for those of you who never experienced those games I suggest you either rent the game first or wait until it hits the discount shelves.

Aliens vs Predator
76%
Good
Review Scores Explained
About The Author 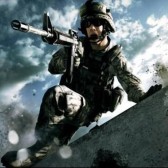