CLOTH TALK SOON COME! You know him as the man who shouts “We The BESSSTTT” on plenty of your favorite songs but you may not know DJ Khaled. The DJ/hypeman/business man has now inked a deal with Apple Music for his “We The Best” radio/tv endeavor and it begins Friday.

Khaled also revealed on Snapchat this afternoon that he’ll have Future on his first episode this Friday at 8pm EST. They’ll be playing a new project that Future is dropping and from the sounds of it, Khaled says it’s called Tape. We’ll see if that’s false or true later but this comes on the heels of Future dropping Purple Reign just two weeks ago and having fans leaving purple umbrella emojis all over the internet (and most certainly in Russell Wilson’s Instagram comments).

Tune in on Friday to hear it and see how much Future and Khaled shake up the internet with this project. 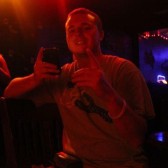