“In Westview, Wanda stares at the version of Pietro from the X-Men films.”

Wanda (Elizabeth Olsen) and Vision’s (Paul Bettany) adventures through television have ripped open the multiverse. Or maybe Evan Peter’s Pietro accidentally ran through the multiverse? We don’t know but something strange is going on and the devil’s in the details.

Evan Peter who played the other Quicksilver in X-Men: Days of Future Past, X-Men: Apocalypse and Dark Phoenix — movies from the X-Men franchise is now part of the Marvel Cinematic Universe — replacing a very dead (hopefully still dead) Aaron Taylor-Johnson from Avengers: Age of Ultron. 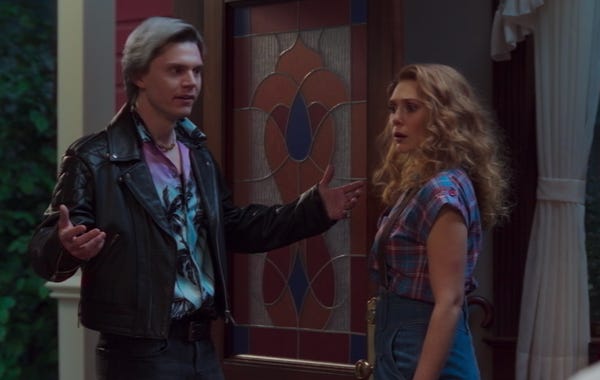 After Friday’s jaw-dropping introduction crossover franchise, WandaVision’s fifth chapter raising even more questions while possibly debunking some old theories. So journey with us as our Entertainment Editor and Editor-In-Chief breakdown of episode 5 including Easter eggs, theories and our predictions for the future of the series.

Check out our review in the video above.

To learn more about WandaVision and the future of the Phase 4, check out our interview with Kevin Feige.

A Special Look At Raya and the Last Dragon