The much-anticipated Coming 2 America follows the ever-unfolding story of the Joffers, the royal family of the land of Zamunda. While the passage of time has resulted in a few changes in the country, some traditions, especially inside the palace, are stuck in the past. As King Jaffe Joffer nears the end of his life, the spotlight turns to Prince Akeem and the inevitable transfer of power. There’s also the burning question of who will become his heir.

Akeem and Lisa have settled into a cozy life, but like most families, there are the occasional disagreements to settle. Akeem and Lisa’s evolution as husband-and-wife, parents and soon-to-be elders is both relatable and universal.

Director Craig Brewer is among the many people who still love the first film.

“The real benefit of making a sequel to a classic like Coming 2 America 30 years later is that you get into the territory of your characters having lived lives,” notes Brewer, who saw the original film, which was his grandmother’s favorite, in theaters as a teenager. “With Akeem, he’s watching his kids grow up and have their own opinions and also, he now carries the weight of being the king of his own castle. I knew those were interesting elements that we could bring to the story, along with the laughter. What might surprise many people is that there’s a lot of heart and soul to the movie.”

As much as Coming 2 America is a comedy, with a few dashes of drama, it’s most definitely a celebration. Brewer felt that energy, even from behind the camera. “I’ve had some memorable moments in my career, but looking at the monitor and watching Eddie Murphy play Randy Watson and singing next to Arsenio Hall, playing Reverend Brown, was just one of the most incredible moments of my adult life,” he says.

Bringing Zamunda and Queens to life on the big screen once more required the talents and dedication of many, both in front of the camera and behind the scenes. Brewer offers up a simple recipe for how it all came together. “The best thing a director can do is hire incredible people, ask them what they need to do their best work and then, get out of the way,” he says.

“This movie is funny and it also has sweet, emotional moments, too,” he says. “It’s escapism, it’s entertainment and everybody needs a good laugh. I’m really proud of how this picture turned out. Coming 2 America is a breath of fresh air.”

Coming 2 America was filmed in Atlanta, Georgia, on the Tyler Perry Studio sound stages beginning in August 2019. And whether the setting was the Joffer palace, the My-T-Sharp barbershop or General Izzi’s compound, creating an authentic look and feel was a collective effort. 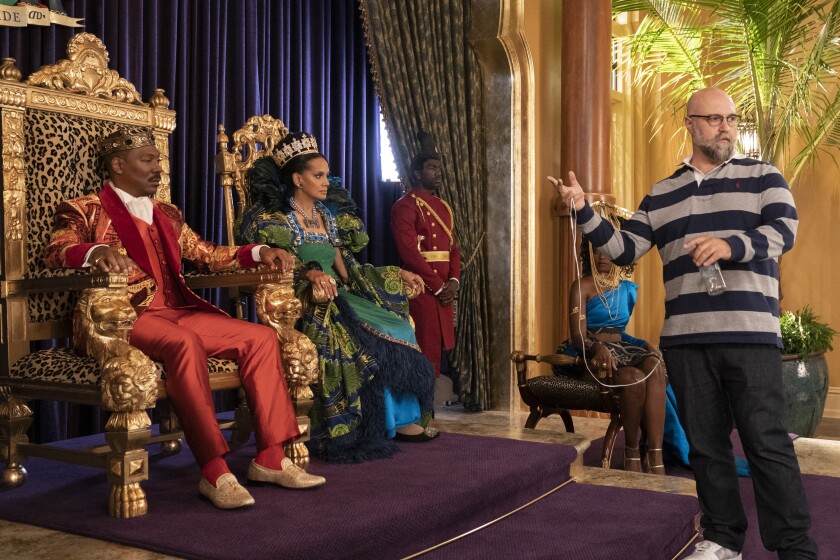 From the opening scene, to when the Rose Bearer Priestess (Garcelle Beauvais) tosses her first pedal and every moment in between, it’s the costumes that capture the eye. That’s the magic of Oscar-winning costume designer, Ruth E. Carter.

“She was the first person I spoke with about the film and I remember us talking about how King Joffer literally wore a lion ‘rug’ over his shoulder, with the animal’s face sitting right there on his chest,” says Brewer, who also collaborated with Carter and Murphy on Dolemite Is My Name. “Since Akeem has three daughters, I imagined they wouldn’t be for killing these great, noble animals, so I wanted us to find a way to give a nod to what that symbolized and do it in a high-fashion way. Later, she came in with this wonderful ceramic lion’s head that she said would be covered in gold leaf, with a mane-like cape that could be wrapped around the king. That’s the world of Coming 2 America, interpreted by way of Ruth E. Carter. She’s an incredible artist.”

Bringing Zamunda and Queens to life on the big screen once more required the talents and dedication of many, both in front of the camera and behind the scenes. Brewer offers up a simple recipe for how it all came together. “The best thing a director can do is hire incredible people, ask them what they need to do their best work and then, get out of the way,” he says.

The learn more about how Brewer honored the legacy of Coming To America and more about Coming 2 America, check out our full interview in the video above.