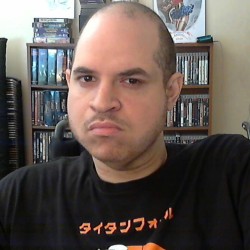 Tony Polanco Executive Editor Considering normal life mundane, Tony prefers to spend most of his time absorbed in fictional worlds that stimulate his imagination. Tony is a geek through and through, and his love for Comic Books, Science Fiction, Heavy Metal, and Video Games knows no bounds. He uses his natural writing talent and communication skills to express to the world why it's awesome to live a geek-centric lifestyle. Former Senior Editor of STFUandPlay and Staff Writer for DualShockers. Current Executive Editor of this here site, Tony writes news, previews, editorials and is the host of the Throwdown, Throwdown your Questions and Spoiler Alert podcasts. Tony encourages the team to do their best by being all George Washington and getting bullet holes in his cape from leading by example. Tony also still dreams of being a superhero one day.
Posts by Tony
Reviews by Tony
Videos by Tony