In the modern horror thriller A Quiet Place, a family of four must navigate their lives in silence after mysterious creatures that hunt by sound threatens their survival. If they hear you, they hunt you.

When John Krasinski first read an early draft of the script for A Quiet Place by screenwriting duo Bryan Woods and Scott Beck, the terrifying premise hit home especially hard. Krasinski’s wife, Emily Blunt, had just given birth to their second daughter and he was already spending his nights in the whispering quietude and anxiety of new parenthood. In the atmosphere, he was utterly transported by the idea of a family’s nerve-jangling, high stakes search for safety, as well as their vital need for connection, in a world where so much as a single cry or heavy footstep could bring instant demise. The story seemed to encompass the most virulent fears of parenthood.

At the time, Krasinski was equally known as a dramatic actor, a writer, and a rising director. But with A Quiet Place, Krasinski was compelled to jump into all three roles, his first major feature wearing a whole range of hats. As he tackled the re-write of Woods and Beck’s high-concept story, he also saw a chance to play in a unique way with the power of the horror genre. Sure, he wanted to build a dread second-by-second in the tradition of breathless thrillers.

But more so, he wanted to create a battle between sound and silence, and between fear and love, that would be a tense, emotional and participatory experience for audiences.

“I was already dealing with all the fears of being a new father, fears of how to keep my daughters safe and how to be a good dad when this came to me and I related to it on a deeply personal level. I felt that within the basic story was such an interesting, and terrifying metaphor for what it takes to be a parent. I was an open nerve emotionally then, so it was a very powerful time to start imagining how two parents might try to protect their children by doing the impossible, by living without making a sound. It just made my imagination explode. There was so much about the idea that I wanted to explore.”

The more he tried to envision being a father in an apocalyptic time, the more frightening, and potent, the idea seemed. The story was full of big, disarming, jolts but there was also some poignancy to a family fighting to communicate no matter how bad things get.

“In ordinary life, you try to make sure your kids are happy, healthy, well fed, taken care of and educated, which is a lot to worry about. But in this nightmare world, the stress of being a parent is that times 10,000. In the Abbotts’ world with on false step, you could lose a loved one, something they know all too well.”

That the film was bursting with creative possibilities for performances, design, and effects also called to Krasinski. “I was excited to explore how to tell this story in the most exciting way using the balance between silence and sound,” he explains.

Horror is a fresh genre for Krasinski as a writer and director, but from the start, he came at it in his own emotionally invested way. “Really, my favorite movies, horror or otherwise, are those that have a strong, underlying metaphor,” he says. “For instance, Jaws is one of my favorite movies of all time. But to me, Jaws wasn’t really about a shark. It was about three men who had something to overcome, and the shark was the catalyst. That’s how I saw this story. It’s a scary movie, but it’s scary because it’s about a real family. And I felt I had the personal experience to bring to that.”

Like all horror movies, A Quiet Place starts with a provocative scenario straight out of your worst nightmares. But from there, Krasinski set for himself a different direction: to link love and fear and invest the audience actively in both. The idea was to have the sense of horror mount in direct correlation with the viewer’s growing attachment to the Abbotts.

A big part of putting the audience in the Abbott’s place became using auditory cues in innovative ways. As Krasinski dug deep into his re-wire of the script, he started making elaborate lists of everyday noises, dividing them between “safe sounds” and “unsafe sounds.” It was both thrilling and revealing to conjure up a world so opposite from our own distractedly noisy one, a world in which sound is redefined as dangerous but also emphasized as a part of the human experience. 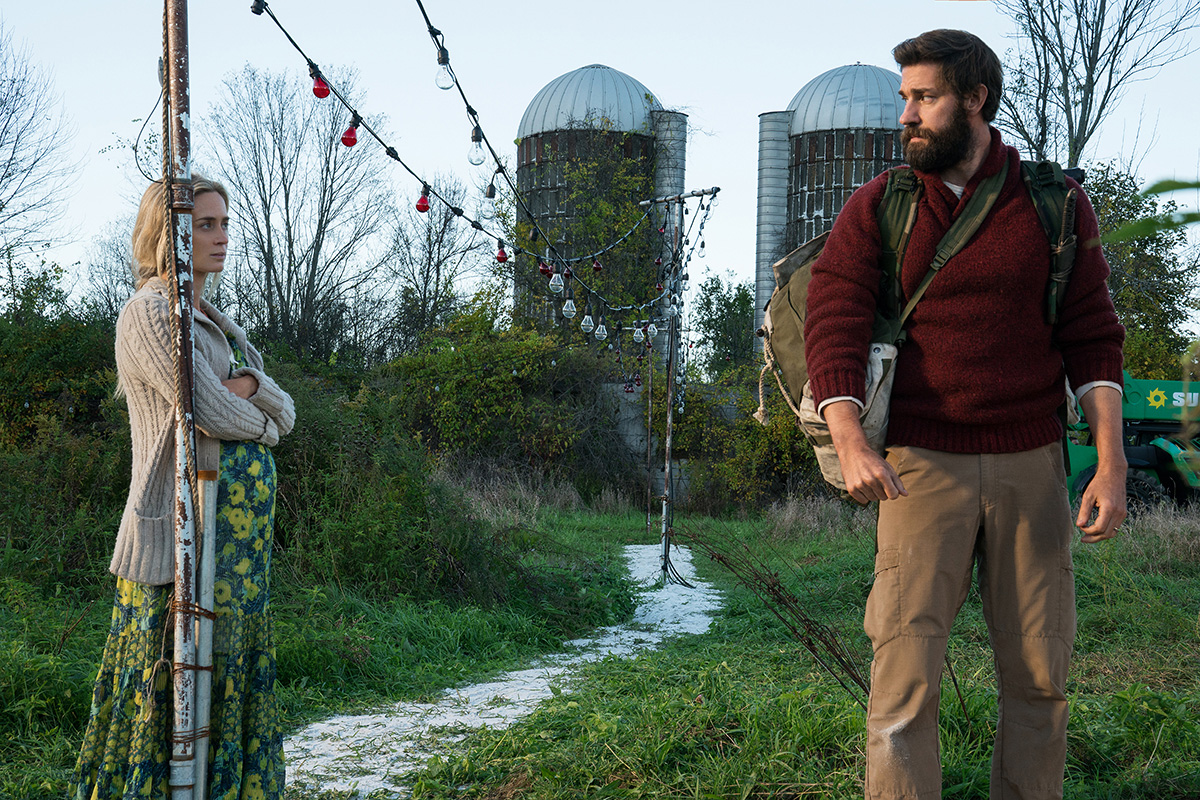 “I really wanted to come to terms with where the threshold would be that you can make a sound and the being that is out there won’t hear you. I spent a lot of time researching every kind of sound a family might make on an isolated farm and then I started thinking about all the ways the family might figure out to dampen those sounds. It was an incredibly fun, imaginative process.”

All the ordinary creaks and hums of daily life, the ones we take for granted, suddenly took on new meaning for Krasinski. “I started listening to everything,” he confesses, “from silverware clinking on plates to the dropping of your shoe when you take it off. It became kind of game in our house where my wife [Emily Blunt] and I would try to be silent and turn to each other real quietly if we ever made a noise, and say ‘you’re dead.’ It turned out to be a great means of preparation.”

Krasinski even had a way of testing which ideas would most rattle audiences to their core. “Often it was Emily and me sitting around imagining situations and if Emily said, ‘I’m so terrified, I don’t even want to think about that situation,’ I would say, ‘that’s going in the script,'”

As production moved ahead, having the support if the highly experienced team at Platinum Dunes, who first brought him the material, bolstered Krasinski’s vision. Michael Bay, Andrew Form, and Brad Fuller are not only three of the most powerful filmmakers in the business, they’ve also shown a passion for the horror genre.

“I feel really lucky that the film came together the way that it did with this team. Everyone was so committed, from the producers to our cast to our crew. I think everyone came on board believing that if we could pull this off it could be something really special.”

Dragon Quest XI Coming To The West On September 4th

April Games With Gold Include Assassin’s Creed Syndicate & The Witness