The reign of Kilgrave is finally over. The monster under the bed has met its end. For Jessica Jones, however, the life she longed for, the peace and quiet, she sought, never arrived. Instead, her ending Kilgrave’s life was documented for all to see, making Jones an overnight sensation and one that many people now fear. But with great power comes great irresponsibility. The world knows about supers. Not the ones buddied up with billionaire tech inventors, but average everyday citizens who just want to escape what they’ve become or who selfishly abuse that power.

Despite overcoming her purple demon, Jones is lost without him. While Kilgrave made her life a nightmare, that undying need to seek revenge is what kept Jones feeling alive. Without him, that rush is gone and guilt sets in as she questions if killing Kilgrave made her the same as the monster she once feared.

Trapped between guilt and sudden mental freedom, Jones is doing what she does best: drinking her problems away while partaking in meaningless sex. There’s also the occasional P.I. services where cheating husbands must pay and missing brothers need to be found. But somewhere in the back of her mind Jones has a longing, a desire to find out about her past. After meeting a potential new client with a questionable ability, her suspicions could have deadly consequences if she doesn’t unearth the mystery of the sudden appearance of supers. 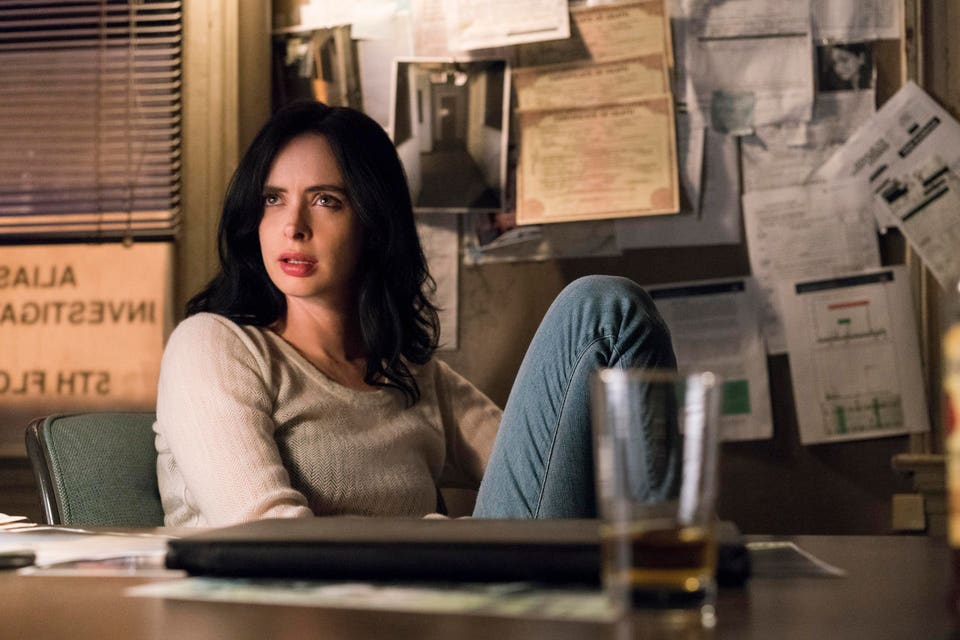 The Koalition had an opportunity to review the first five episodes from the second season of Jessica Jones. These opening chapters take us down the rabbit hole of Jones’ journey to the past.

The second season of Marvel’s Jessica Jones is a toned-down version of the Jones we’ve seen before (this includes The Defenders). We find her still taking cases, but she seems bored without the urge or need to stop someone who is truly causing harm on a massive scale. The few cases she accepts are often met with disgruntled customers wanting her to enact deadly revenge. Thrust into a spotlight she never asked for, Jones feels like a sideshow attraction. Full of grief and anger, there’s the mental weight of having abilities. Her search for the truth is an angry one: anger for what she’s become and anger for those who abuse it. But mostly, she’s angry because the majority given these newfound abilities never asked for them.

This feeling of violation burns at the pit of her gut. As the plot slowly unfolds (emphasis on slowly), we find out everyone has secrets from their past that need to be answered. Malcolm (Eka Darville) and Jeri (Carrie-Anne Moss) are given more screen time as they both struggle with their own inner demons. Honestly, their storylines (which feel more like side missions) are more captivating and unfold more easily than Jones’ despite their disconnection.

There’s a sort of ease of falling in love with Jeri’s story as she receives life changing news. She drifts in and out of acceptance, finally landing on a personal journey of “fuck you” as she finds company with an assortment of questionable characters that help to momentarily take the pain (both physical and mental) away. When the show breaks away from her story, there’s a sense of longing for more that drifts in and out of your consciousness as the writers expound on other stories.

When you’re not being drawn in by Jeri or Malcolm’s struggles with sobriety, Jessica’s best friend Trish (Rachael Taylor) takes a more active role this season. She helps to guide the villain-less story as Jones fights her desire to discover who made her the way she is. Trish is that shoulder to lean on, even if she has her own motives.

Season 2 also introduces us to an all-female directing staff that helps make the season more realistic. Unfortunately, it’s also less artistic. There was a sort of noir-style from the first season that carried throughout each scene. Aside from the way Jones carries herself and the opening credits, its sadly lacking and its timid execution reverberates throughout the show.

While the show does rely heavily on Jones’ sleuthing skills, it fails to really inject a sense of urgency and importance. As a result, the show drags. Each episode feels never-ending. Jones is only as strong as those she’s up against. Without a clear villain, everyone loses.

Even though the first half of Jessica Jones is disappointing, that doesn’t mean this show is hopeless (like Iron Fist). Krysten Ritter is once again delightful as she truly embodies a suffering anti-hero. Not one for speaking, each line delivered is with an air of sarcasm and monotone flatness. However, Ritter carries the weight of her journey through her eyes and body language.

While Jessica can carry season 2 on her own, she’s only as strong as the writing. For the first five episodes, what originally pulls you in feels like it is drawn out. However, this is a show of thirteen episodes. Hopefully, something worthy eventually happens.

AMC Theatres Will Charge Extra Based on Your Seat Location

I Know What You Did Lat Summer Sequel In Development: Jennifer Love Hewitt and Freddie Prinze Jr. Set to Return

Is Yellowstone Ending? Matthew McConaughey in Talks Amid Report of Yellowstone’s Uncertain Future