Since the existence of the first full-length TV show in 1928, television has been used an escapism from everyday life. However, there is something comforting in seeing the lives of fictional characters represent the everyday struggles and triumphs average citizens are experiencing.

This is why shows about blue-collar families with relatable issues are important to viewers. From the early days The Honeymooners, Roseanne, to Family Matters and Everybody Hates Chris they have forged a path for shows about the everyday man; and now it’s time for Netflix’s The Upshaws to shine.

The Koalition spoke to actor/rapper/comedian Page Kennedy (who starred alongside Jason Statham in The Meg) about finding the truth in his character, his influences, and more.

Blending comedy with everyday realities and family relationships, the show finds Mike Epps’ Bennie as a blue-collar mechanic with a complicated family played in part by Wanda Sykes and Kim Fields. Created by Epps and Sykes— the cast uses their blunt comedic timing and acting finesse to create a show that’s both hilarious and honest. With an all-star African-American cast, Netflix’s The Upshaws continues to celebrates diversity and authenticity to its characters.

When it comes to separating The Upshaws from other shows, Page believes the language of the show is important to creating an honest portrayal of its characters. “The main thing point is we curse. We speak in authentic way that many urban neighbors and Black people speak so they’re going to feel what’s familiar to them because in a lot of way things are watered down for television and for a lot of other reasons but [The Upshaws] has chosen the give the authentic self.”

Easily described as a gentle giant, Duck is a reformed ex-con fresh out of jail after serving seven years for a prison robbery where the getaway driver didn’t get away but Bennie did. Despite spending years in prison which would have harden the hearts of many, the newly religious Duck is focused on turning his life around with the help of his grateful best friend Bennie and God.

However, the path to finding Duck’s kindness was paved with misconceptions during its developmental stages as Page was still trying to discover who Duck was as a person and how he fits into The Upshaws’ life. Duck was originally portrayed as the classic threatening guy until Page had a conversation with the creators and drew inspiration from the show’s writer Dino Shorte. It was during these conversations Page found Duck’s natural rhythm and heart.

“I had him be more scary at first, he was more threatening but that’s for a different genre show, this is a sitcom and it has to be played differently. If I [continued to play Duck scary], it wouldn’t say how much love Duck has for Bennie. I like it this way more so than the way I had initially designed it. I think there’s more simpatico with Duck being this way, he’s more likable.”

Despite being surrounded by comedians, Page’s comedic timing is naturally displayed in the moments where Duck is being the most true to himself compared to trying to one-up his fellow castmates. While the most understandable way to play Duck would be as a man full of resentment and jealously towards Bennie and his family, Page is determined Duck embraces Bennie and his family with love and gratitude.

“I play Duck kind of true to himself. I don’t fully even play the comedy of Duck, I just play the honesty of him. I think his funny lies in how honest he is. He has this genuine love for Regina and he asked these question and he’s so concern, that in itself is so funny because ‘Why are you so concerned about this man’s wife?’ So the more earnest I play it, the funnier [compared to] trying to make it funny.”

“[Ducks’] best quality is his loyalty and his worst quality is his loyalty. [It] caused him to be in jail for seven to ten years. Based off the way I’m playing the character I don’t think [Duck has any resent towards Bennie]. “Duck is not resentful. He is very loyal to Bennie, I think he loves him and I think it is something that you do. We went in to do this crime together and knew one of us got away, I’m gonna hold this down for him. Just like Duck got out, Bennie held it down for him. Now when I first started playing that character in the audition, I kind of played it that way and they kind of switched it and said he was more obsequious to Bennie.” 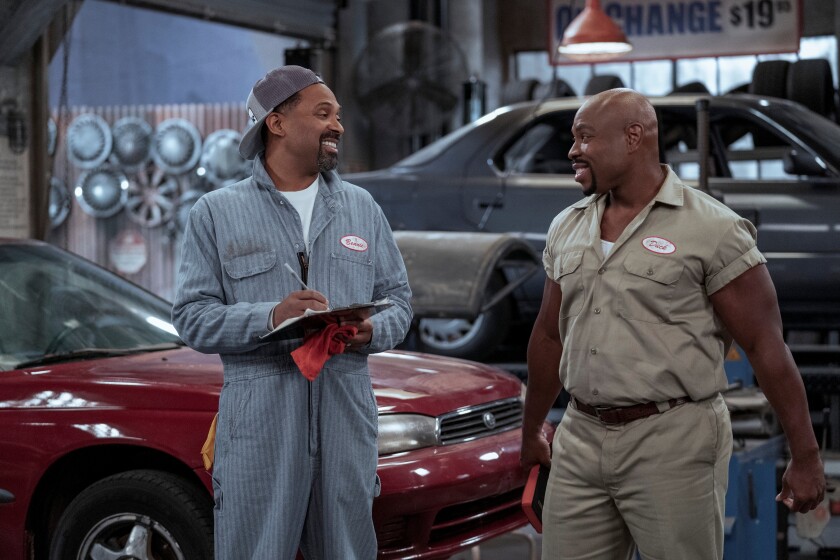 Looking forward to the future, Page hopes Duck “could get more involved with the family. The first three episode he was more a part of the kids and Lucretia. He wasn’t just at the shop he was more part of the whole picture. I would like Duck to be more than just at the shop and actually be involved in the family stuff more and I would love to see what Duck and Regina’s relationship is because if you look in the whole series they only had two scenes together.”

While fans await word of a second season and with a book and another movie on the way, Page is continuing to balance his acting and music career. Continuing to use his voice to address sociopolitical issues that affect the lives of people of color, his latest album titled ‘Page‘ reflects upon the Black Lives Matter movement, chronicling the current Black plight in America. Early this year Page released its single ‘Safe‘ followed by ‘Fear‘ which stared The Upshaws Kim Fields.

To learn more about The Upshaws and Page Kennedy’s career as a rapper, check out our full interview below.

Everything You Know Is About To Change: The Cast Of Loki Takes Us Into The Unknown

Elden Ring Looks Fantastic And Is Coming To PC and Consoles On January 21st, 2022

World’s Biggest Hammerhead?’s Candace Fields Has a Passion for Shark Conservation and You Should Too

The Cast of The One That Got Away Talk Second Chances

Beyond Infinity: Buzz and the Journey to Lightyear Featurette Has Landed on Disney+

Peter Jackson Will Be Watching The Rings of Power Series

Jared Stern & the Beauty, Hilarity and Warmth of DC League of Super-Pets